With new eco-conscious and ambitious chefs at their helms, impressive Moscow restaurants are multiplying. Try some of these suggestions for classic Russian cuisine with modern touches and fresh farm-to-table options. 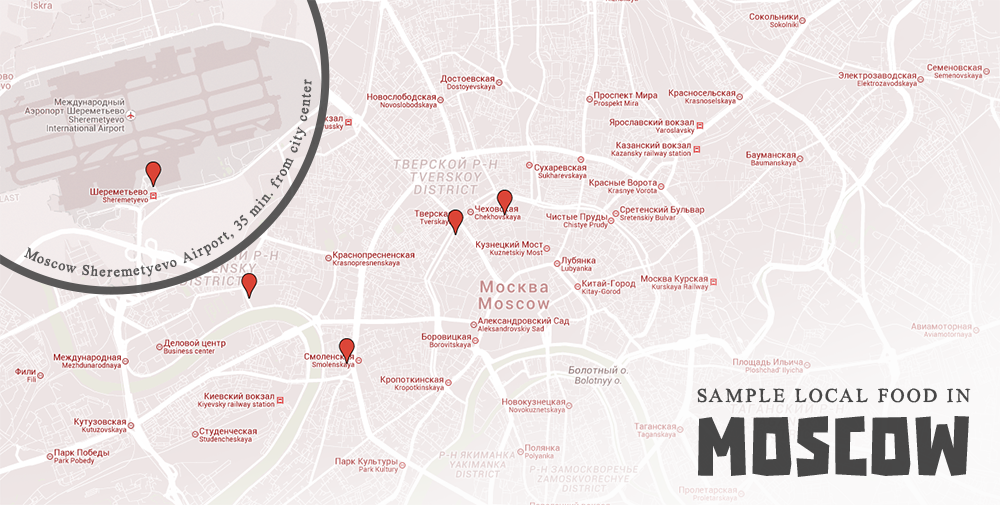 The very popular Café Pushkin is named after a fictional café in the song Natalie, written after a trip to Moscow by the French singer Gilbert Bécaud. The song inspired restaurateur and artist Andrei Dellos to create the café, which opened in 1999 in a Baroque mansion on Tverskoy Boulevard. Head chef Andrei Makhov is dedicated to the mission that the menu provide both French and Russian cuisine. The café has become a popular spot to try Russian breakfast dishes like blini, a perfect fusion of French and Russian decadence. These delectable crepes are made from either buckwheat or white flour, depending on whether they contain savory or sweet fillings. Another popular type of pancake is the dense ricotta syrniki, served with jam and honey for breakfast or dessert. Café Pushkin’s pelmeni, or savory dumplings, are also highly regarded; try the ones stuffed with wild mushrooms.

The White Rabbit is the first collaborative effort of restaurateur Boris Zarkov and chef Vladimir Mukhin. The Alice and Wonderland-themed restaurant is on the 16th floor of the Smolensky Passage building and is encased in a glass dome, giving the restaurant an atmosphere as whimsical as its dishes. Don’t miss the caviar set with sour cream mousse or the stewed pork ribs with apples, chokeberry and fried spinach.  Mukhin says he has “borscht running in his veins”. His recipes reflect that, with traditional Russian produce and ingredients getting a modern twist. In 2015, the White Rabbit placed 23rd on the prestigious list of The World’s 50 Best Restaurants.

Established in 1997, Shinok has become a popular stop for international celebrities and can boast visits from the likes of Vivienne Westwood and the Rolling Stones. Visitors flock to the restaurant for its Ukrainian dishes, such as vareniki (a type of dumpling), Ukrainian-style borscht, buckwheat porridge, and veal brains. In the restaurant there is an area housing live animals such as cattle, poultry and sheep.

The first farm-to-table restaurant in Moscow, LavkaLavka’s food is made from fresh, locally sourced and seasonal produce. Fueled by a need to provide an organic, sustainable food source to their communities and inspired by the culinary traditions of Russia, the three founders of LavkaLavka started the business as a grassroots movement. The restaurant creates its recipes based on the idea that simpler farming methods do not mean that the food has to be boring. LavkaLavka also has a grocery store, where visitors can buy organic food and produce.

If you’re craving some traditional Russian fare immediately after landing and are staying at the Radisson Blu Hotel, Moscow Sheremetyevo Airport, overlook the runway when dining at Restaurant Altitude. It has just the dishes to whet your appetite. The splendid selection will give you a taste for what’s to come on the rest of your Moscow gastronomic adventure.

Tell us what you think

Getting to know the Kremlin

Doing Moscow in a hurry? Visit these 3 must-see attractions